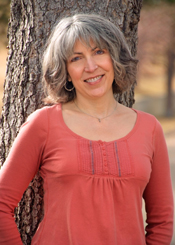 Penny was born in Colorado Springs, Colo., grew up in Canon City and says she is “insanely proud” to be a Colorado native.

She met her husband in college at the campus radio station. Their first date was a media banquet, and they got engaged three months later. Penny was working in Colorado Springs at the time; her Dad came VERY close to putting a station bumper sticker on the back of his tux as he walked Penny down the aisle, but he knew her mom would have murdered him.

Penny says she and her husband “decided to not have kids and instead are putting our veterinarian’s children through school. ;)” She is a voracious reader (and actually kind of hates television). She also loves to hike; she’s climbed four of Colorado’s 14,000 foot mountains. She loves to travel and loves ALL kinds of music.