Click any event heading to see details about that event.

Pre-registrations are being accepted for the First Annual Deputy Scott Brown Memorial Scholarship Fund Golf Outing will take place July 16 at the Elks Country Club in Lincoln. The outing will raise money for the memorial fund and will feature two shotgun starts at 8 AM and 1 PM (depending on the number of entries) and a silent auction.

The cost for participation is $75 per person or $300 per team. The deadline for registering is July 2.

All proceeds will be used to carry on Deputy Scott Brown’s mission and belief that everyone needs a helping hand sometimes and “Everyone is a role model; choose to be a good one.”

To donate auction item(s), services or monetary donations, please contact Rod Boyd, rboyd@logancountyil.gov 217-735-6720 or 217-737-5176 or Christy Fruge, cfruge@lincolnil.gov 217-732-2151 or 217-737-7665 and arrangements will be made to pick up the donations. Donations can also be dropped off or mailed to the Logan County Sheriff Department, 911 Pekin Street, Attention: Rod Boyd or the Lincoln Police Department, 710 5th Street, Attention: Officer Christy Fruge. 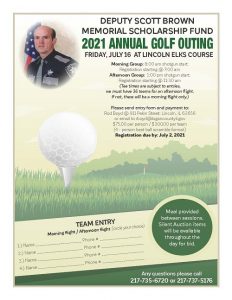